With every update, Apple excites its users in providing amazing experience and has always delivered the best update keeping in mind what the audience wants. What iOS 11.2.2 has now? Let’s check-

Siri is updated to provide audio-based news to its users via Podcasts app when asking Siri for the current news updates/information. This has been made possible for both iPhone and iPad users. This audio-based news was previously seen in the iOS 11.2.5 beta but has been now implemented and is made accessible on devices running iOS 11.2 and iOS 11.2.2.

If you are in UK Siri will offer up audio news from BBC, Sky News, or LBC. While in other countries local news podcasts can be played. 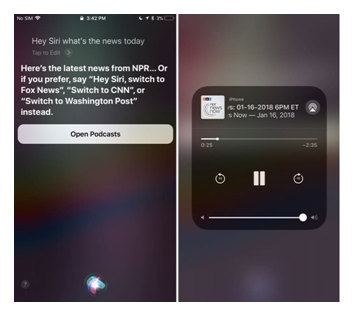 The feature has been first reported by MacRumors, with a variety of users pointing out that asking Siri about the news of the day via the “Hey, Siri” voice command, podcasts will begin to play. The default source appears to be NPR, according to the report, but you can ask Siri to play content from CNN or The Washington Post, if you are so inclined.

Well, it’s a really exciting feature for the users who use Siri on daily basis as well as those who wants to stay updated with the daily news.

Stay tuned for updates and to know more about ios app design services, write to our expert at managers@infiCaretech.com or connect via Skype (ID- infiCare5)