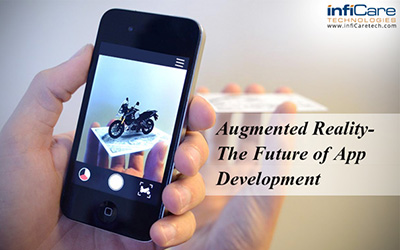 Augmented Reality (AR) is the next big thing in the world of mobile technology in which the users witness the dream technologies becoming a reality with computer-generated data overlaid on it. It works with smartphones and tablet devices that use GPS to identify the location and then offer data as graphics, videos, and tags.

How does Augmented Reality work?
Before we dive into the discussion of what would be the future of AR mobile app development, let us see what all makes the AR work. In augmented reality, the sensory feelings of what we see and hear are enriched to a great extent that it blurs the line between what exists in the real world and computer-generated creating a wow user-experience.

There are various mobile apps that have used Augmented Reality technology. Let’s see in detail some of the AR apps which made perfect use of the technology-

Another platform is E-Commerce where at some point in time user had to face some restraints in buying things as it may seem to be confusing to them. To counter that, Lenskart app took the help of the AR technology to use the camera to let you try out glasses online. Here users can test the product, how it looks on them before buying. This proved to be an immense success to Lenskart and gave a trust to the users to buy from these sites.

Many Virtual Reality glasses are being introduced to the mass market which leads to the next stage in mobile app development. Recently as announced by Mark Zuckerberg: “Facebook too is working on Augmented Reality glasses”.

Including Augmented Reality technology in your application might uplift the customer experience, engagement and marketing. So, if you are ready to take your business to the next level, investing in AR app development will be the right decision!

Find more about mobile app development at infiCare. Reach us at managers@inficaretech.com